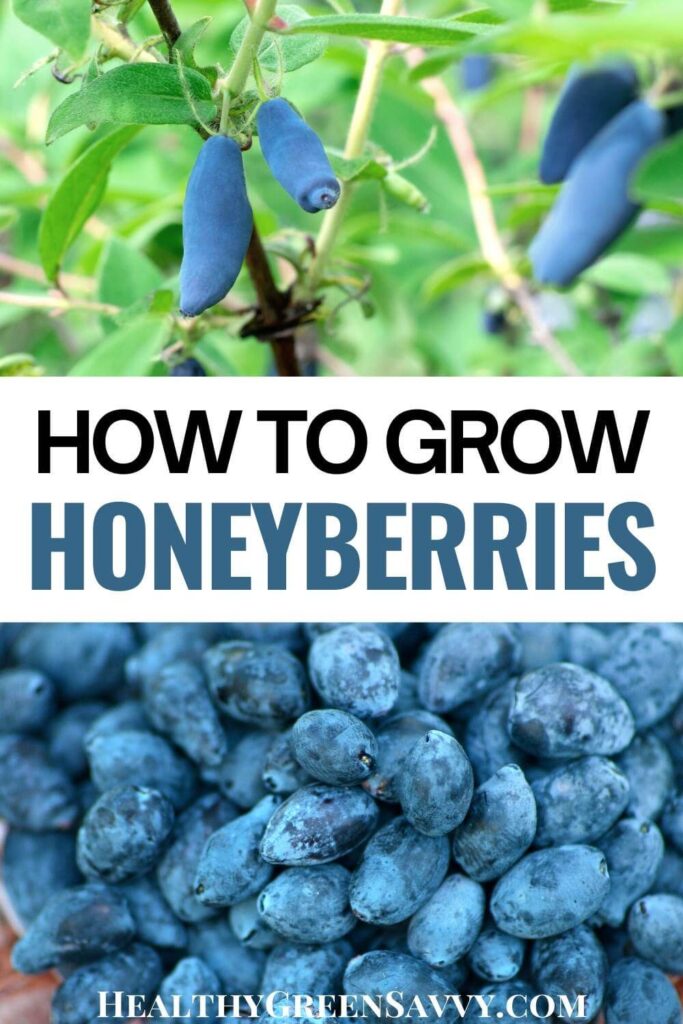 Ever tried haskap berry? Also called honeyberry, this lesser-known fruit is a must-have for the berry lover who wants an edible landscape that produces as early in the season as possible.

Along with rhubarb, haskaps are a gift to the northern food gardener, one of the earliest fruits ready to harvest after a long winter. Months before the blueberries arrive, haskap berries come in by the boatload.

WHAT IS HONEYBERRY / HASKAP BERRY?

Though not widely known in North America, honeyberries have a long history in Japan, where they are reportedly prized for their anti-aging properties and benefits for vision and cardiovascular health.

Higher in anthocyanins than blueberries and many other fruits, haskap berries are also high in vitamin C and potassium.

Haskaps’ rich concentration of antioxidants have prompted researchers to explore its possible applications for human health. Studies have found that haskaps have anti-inflammatory and anti-carcinogenic effects, and may have a beneficial impact on cholesterol levels, cognitive function, and insulin resistance.

Some types of honeysuckle flowers are also edible and medicinal. Find out more and check out some delicious honeysuckle recipes.

Haskaps’ primary appeal is how incredibly early they ripen. Plus they’re super hardy, producing well in cold climates as far north as zone 2! They’re also not fussy about soil and don’t require a lot of care. If like me you haven’t had much luck with blueberries, haskap berry plants will surprise you with their vigorous growth and abundant fruit.

Haskaps are perfect for the permaculture garden, where busy gardeners want to spend their time harvesting rather than tending to needy plants. Once you plant them, they can produce for 30 years or more with relatively little maintenance.

Some people liken the flavor of honeyberries to a cross between blueberry and raspberry, but the ones I’ve tried really don’t have any raspberry to them. They’re closest to blueberries with a slightly sour, slightly bitter aftertaste, but some of the newer cultivars have been bred for sweetness and will likely taste better.

WHERE TO PLANT HONEYBERRIES / HASKAP BERRY

Unlike some rangier-looking fruits like raspberries, haskap berries are attractive, well-behaved shrubs. They grow to about 5 feet in height with a rounded form.

Because of their attractive form, you can put them in around a foundation, as part of a larger perennial grouping, or as a low-growing hedge.

As someone with a teeny-tiny yard, I’ve always had to look for unusual places to grow food. I quickly set my sights on that silly patch of grass no one uses between the sidewalk and the street called in some places the boulevard, or parking strip.

I planted five haskap berry plants, and in addition to the lovely fruit they produce, they provide a pleasant buffer from passing cars.

If you’re curious about whether it’s safe to eat food grown in parking strips, I did some research on the subject awhile back. You can read the article here.

I grow several fruit trees and plenty of rhubarb and perennial herbs on the parking strip as well. Given how limited our space is, taking over those stretches near the street — with full sun! — lets us greatly expand what we can grow.

HOW TO GROW HONEYBERRIES IN THE HOME GARDEN

One critical thing to know about growing haskap berry is that you need more than one variety for pollination. When you purchase them, make sure you’re getting honeyberry plants with similar bloom times, or they won’t set fruit.

Honeyberry USA groups them by bloom time and lists pollenizing plants to help you make informed decisions. Here’s a chart that lists compatible varieties as well.

Solo is a self-fertile variety that does not require additional pollenizer plants, though yields will be better with an additional haskap plant.

Honeyberries are northern plants and do best in zones 2 to 4, but if you live in a warmer climate, one of the later-blooming varieties, such as Solo and Maxie, may do well. Haskap berry plants will require protection from summer sun in warmer climates.

Haskap berries prefer soils with a pH of 5-8 and will do best in well-drained, loamy soil, but do fine even in clay-ey soil. Sandy soils may need amending before planting.

Be sure your planting hole is wide and deep enough to accommodate the roots, which you should angle downward at planting time rather than spreading widely. Honeyberry plants have a shallow root system, so encouraging them to dig deeper will help your plant be more drought resistant.

Mulch well to conserve moisture and prevent weed competition. If you do need to weed, be sure to be careful not to damage honeyberries’ shallow roots.

A top-dressing of compost or aged manure will help nourish your honeyberries and support bigger yields. Apply in

Because of their shallow root system, honeyberries can get easily “burned” from an application of fertilizer. If you do choose to apply fertilizer, use a small amount of a balanced fertilizer like fish emulsion.

Water regularly until well-established. Deep watering is always preferable for these shallow-rooted plants.

Like elderberries, haskaps benefit from regular pruning. They don’t need pruning for the first 5 years, but annually after that, it’s recommended you prune back roughly 1/4 of the older branches to encourage new growth for best yields. Prune while the plant is dormant in late winter to reduce the chance of disease.

Though haskaps are desirable for their early arrival, you want to let the berries ripen fully before picking. When they’re a purplish color and have a whitish coating, you’re best off leaving them alone, as they taste WAY better once they turn a deep, dark blue. If you pick them too soon, they will make your mouth pucker, and that’s coming from someone who eats copious amounts of fresh rhubarb.

Haskap berries have very thin skins and are quite perishable, so plan to eat or freeze them within a few days. Those that are a little too soft for fresh eating can still be used cooked or added to smoothies.

Commercial growers report that if handled gently and stored at high humidity and a 33 to 34 F, honeyberries may last considerably longer.

Because haskaps are so early, they tend to evade some of the persistent pests that can plague other crops, like voracious Japanese beetles that defoliate our grapevines.

Most years, our haskap berries are finishing up before the insidious SWD fruitfly comes along to ravage berry crops, but one year, they even got into the end of the honeyberry harvest, turning ripe haskap berries into a mushy mess.

Since I started carefully picking up any fallen berries and making sure to harvest all the fruit, the SWD problem has gotten loads better, and most of our berries make it to maturity unscathed.

If the birds discover your haskap berries, you may lose your crop, so many growers use netting to keep birds off. Deer and other wildlife may try to pilfer them as well.

Get more practical ways to live greener and healthier delivered straight to your inbox! Sign up for our weekly newsletter here and choose a free e-book as a welcome to the HGS community.

WHERE TO GET HASKAP BERRY

It’s unlikely you’ll see this niche fruit for sale in a grocery store, or even a farmers’ market, so growing your own is really the only way to get your hands on them.

Some of the major online plant sellers carry honeyberry plants, and you may come across them in garden centers occasionally.

You’ll need to plant more than one variety of honeyberry for pollination.

For the widest variety of honeyberry plants, you need to check out Honeyberry USA, an amazing operation specializing in cold-hardy fruits just a few hours from me in northern Minnesota. They have ten varieties, with detailed descriptions that will help you select the best cultivars for your needs.

Some of the sweetest cultivars are considered to be Maxine’s Opus and Aurora.

WHAT TO DO WITH HASKAP BERRIES

Want a couple recipes for inspiration? Here’s a simple haskap berry crumble from the Haskap Canada Association. They also have a recipe for a chutney made from haskaps. Or check out these recipes for haskap cheesecake, pie, and a crisp that pairs haskaps with another spring favorite, rhubarb.

Love growing your own fruit? Be sure to try juneberries and elderberries! Here’s what to know about growing elderberry, and here’s info on growing and foraging juneberries or saskatoons.

Other berries to grow or forage include wild black raspberries, mulberries, and black chokeberries.

If you love the thought of growing tons of fruit in your edible landscape, be sure to check out these books on growing fruit in the home garden.

Pin to save this info on haskap berry for later!

« No Mow May & Beyond: Protecting Pollinators in Your Yard
Are Rhubarb Leaves Poisonous? {Plus 6 Best Uses} »